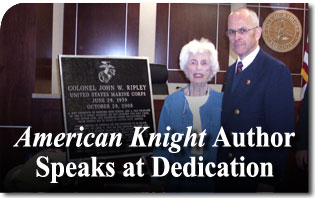 The citizens of Radford, Virginia took time out on this Veterans Day 2013 to honor one of their own, the late Col. John Ripley, USMC. Since his untimely death in October 2008, this grateful city in southwestern Virginia, through a group termed the “Ripley Committee,” has honored the Marine legend in a number of ways.

Through their efforts, a painting of the late colonel in his dress blues was dedicated last Veterans Day and now hangs in the Radford Public Safety Building lobby. Earlier this year, Radford City council went one step further and declared April 2 to be Colonel John Ripley Day.

In another gesture of devotion, the decision was made to go yet one more step with the renaming of the University Drive Bridge after their favorite son. Visitors to the city will now cross the Col. John Ripley Bridge when they visit the New River and take a peak at Castle Island, where the city’s “Huckleberry Finn” lived his adventurous boyhood.

On hand for the dedication was Col. Ripley’s sister Mary Susan Goodykoontz (pictured above) and TFP member Norman Fulkerson. As the author of An American Knight, the only biography to date of the late colonel, he was invited to speak and was received by locals with a standing ovation. Many had read his gripping account of a man they had known as a mischievous youth whose eyes “danced with a sense of wonder” and who later earned legendary status in the Marine Corps. Col. Ripley was most commonly known for having halted the largest Communist offensive of the Vietnam War when he destroyed the Dong Ha Bridge on April 2, 1972. Mr. Fulkerson chose to focus his remarks on the man’s moral courage.

He opened his brief remarks by commenting on the “irony of naming a bridge after a man who was most commonly known for destroying one.” Enriching this theme he explained how the Dong Ha Bridge was not the only structure Col. Ripley destroyed during his memorable life.

“We live in a very bad world,” Mr. Fulkerson explained, “and there is a subtle tactic among those who hold contrary opinions to get us to make concessions on our principles. This is a gradual process that he metaphorically referred to as “building bridges” between conservative and liberal opinions. Through such a tactic, he concluded, we are not asked to give everything at once but merely make small compromises. Col. Ripley was not one to fall for such a tactic, as was exemplified with the proverbial “bridges” he destroyed through his energetic testimonies against allowing open homosexuals to serve in the Armed Forces and sending women into combat.

He finished his remarks by explaining how Col. Ripley did build one bridge. It was a task to which he devoted his whole life. It was the “bridge that would link him to God, our Lord Jesus Christ.” The Marines’ Hymn has a stanza that speaks of the streets of Heaven being guarded by United States Marines, Mr. Fulkerson concluded. “When we cross the bridge he erected, I feel certain we will meet one great United States Marine on the other side, Col. John Ripley.”