You are currently browsing the archive for the Navy Seals category.

He Fought to the Death

Matthew G. Axelson was born on June 25th 1976 in Cupertino, CA. He graduated from CSU Chico and went on to join the US Navy to become a member of their elite special warfare team, the Navy SEALs.

Many Taliban and Al Qaeda operatives hide among the treacherous peaks of Afghanistan, making searches and missions difficult and dangerous. However, for Navy Seals called in to search the hostile areas, it’s just another day’s work.

Petty Officer Axelson, along with Petty Officer Dietz, were part of a four-man reconnaissance team sent on one such mission, tasked with finding a key Taliban leader east of Asadabad, Afghanistan. As the team made their way through the mountainous region, Taliban sympathizers spotted the Seals, and alerted terrorist fighters of the team’s presence.

A deadly firefight ensued between the four Seals and an enemy force of at least 30 fighters. Positioning themselves as best they could, the team realized they needed help. They radioed for reinforcements – and soon, a MH-47 Chinook helicopter was on its way to help in the fight.

However, the Taliban fighters spotted the Chinook as it made its way toward the Seals’ position, and they launched a RPG toward the aircraft, shooting it down and killing all 16 men aboard.

Although Axelson and Dietz died from their wounds, their actions allowed one of the Seals to evade the enemy and escape. A few days later, the surviving Seal was recovered by U.S. forces.

Both Axelson and Dietz were posthumously awarded the Navy Cross on Sept. 13, 2006. 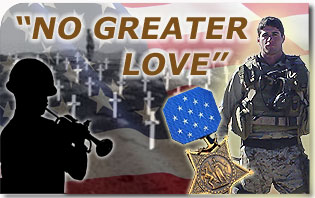 On September 29, 2006, Ramadi, Iraq was considered the most dangerous city on planet earth for American servicemen. Michael Monsoor was there in the midst of it all. He was a member of the elite branch of the Navy called SEALS, which stands for SEa, Air and Land. On that day, he was on a rooftop over-watch in the most contested part of the city called the Ma’laab district. Positioned near the only exit, with an MK 48 machine gun in hand, he was providing security for two SEAL snipers who lay in prone positions on either side of him. Moments later a fragmentation grenade bounced off his chest and landed on the ground…

Becoming a Navy SEAL
Although nothing can adequately prepare one for such a circumstance, Michael Monsoor seemed to be living a life which pointed to it. He was an adventuresome boy growing up in Southern California. His father George and older brother Jim had both been proud Marines. His boyhood dream of being a SEAL began to be realized when, at 20 years of age, he joined the Navy.

In the first phase of training, he broke his heel. Exhibiting the selflessness which would become his trademark, he continued to run with a pain so excruciating he nearly passed out. Unable to continue, he was forced to ring the bell indicating that a trainee had quit the program. He was medically rolled back and sent to Italy for a year where he spent the majority of his off time doing physical training. His mother, Sally, when visiting him, said he hardly ever stopped running.

He then reentered a grueling SEAL program where only 23% pass, graduated at the top in the class of 2005 and was assigned to Delta Platoon. In April 2006 he was sent to Iraq on his first tour of duty.

From here we almost lose our breath as we follow the rapid upward trajectory his life would take.

Rescued from the Jaws of Death
As a heavy-weapons machine gunner, his position while patrolling the streets of Ramadi with Delta Company was right behind the point man. The responsibility for protecting the rest of the unit fell squarely on his shoulders. It was an appropriate position for a Catholic young man named after the warrior angel, Saint Michael.

He was also a SEAL communicator which required him to carry a rucksack full of communications equipment in addition to his MK 48 machine gun full of ammunition. He carried the extra 100 lbs, without complaint, in temperatures as high as 130 degrees.

In May of 2006, during his first month in Iraq, his unit came under fire during counter-terrorist operations. Heavy enemy automatic weapons fire resulted in a wounded SEAL who was left exposed to enemy fire. Michael threw caution to the wind and ran directly into the line of fire to help the injured soldier. As gun fire chewed up the asphalt around him, Michael snatched the wounded soldier from the jaws of death with one arm, returned enemy fire with the other and then dragged him to safety.

He then maintained suppressive fire while the wounded SEAL received tactical casualty treatment. After loading his wounded teammate onto an evacuation vehicle, he returned to the battle. This act of heroism earned him a Silver Star and a reputation for putting others first.

Some months later the injured soldier had a dream of the incident where the Michael who rescued him had wings. He later had an artist make a reproduction of the image in his dream depicting Michael Monsoor in dress blues with a loaded MK 48 Machine gun and silvery wings. As a tribute to Saint Michael the Archangel, who he felt was there with them, he included the short exorcism which invokes the warrior angel to “be our protection against wickedness.”

Streets Paved with Fire
Such protection was sorely needed especially considering that 75% of the missions involving Michael’s platoon came under attack. Thirty five escalated into heated firefights taking place in “streets that were paved with fire.”[1]

During eleven of those missions Michael’s leadership, guidance and decisive action were key in saving the lives of many of his men. For his heroism he was awarded the Bronze Star. The citation accompanying the medal describes how he “exposed himself to heavy enemy fire while shielding his teammates with suppressive fire. He aggressively stabilized each chaotic situation with focused determination and uncanny tactical awareness. Each time [terrorists] assaulted his team with small arms fire or rocket propelled grenades, he quickly assessed the situation, determined the best course of action to counter the enemy assaults, and implemented his plan to gain the best tactical advantage.”[2]

In the midst of such violent action, Michael Monsoor displayed what Secretary of the Navy, Donald Winter described as a “cool headedness under fire” and “when hostility broke out, he proved he was a SEAL you wanted on your team.”[3]

As extraordinary as all of this is, it was merely a prelude to the defining moment of his life in the rooftop over-watch.

“Path of Honor”
When the grenade landed in front of him, Michael Monsoor knew that the length of the fuse would not allow him to toss it out. He also knew that he was two short weeks away from returning home to family and friends. Plans were already made for him to see his younger brother play in a football game for North Dakota’s Minot State University.[4]

With the only exit door at his back, a live grenade at his feet and two Navy Seals in front of him he was faced with the hardest decision of his life. It was one of those rare moments when life passes before your eyes. Having already endured so many hardships and numerous brushes with death no one would have faulted him had he chosen a path to safety.

“He chose a different path,” said Mr. Winter, “a path of honor.” On numerous occasions, Michael Monsoor stared death in the face in his heroic defense of others. Once again he and death would meet and once again he put others first. With unflinching selflessness he gave his life so that others might live. In so doing, he saved the lives of three Navy SEALS and eight Iraqi soldiers.

One of the survivors described how “Mikey” looked death in the face that day and said, “You cannot take my brothers, I will go in their stead.”[5]

“He never took his eye off the grenade, his only movement was down and toward it,” said a 28-year-old lieutenant who lived to tell the story. “He undoubtedly saved mine and the other SEALs’ lives.”[6]

Another eyewitness described Michael’s countenance, as “completely calm, showing no fear only resolve.”

It could easily be said of him what Gen. Pericles said in his funeral oration for the warriors of ancient Athens, “He passed away from the scene, not of his fear, but of his glory.”

Feast of St. Michael the Archangel
Michael Monsoor was immediately evacuated to a battalion aid station. Fr. Paul Anthony Halladay, his platoon chaplain, was with Michael as he passed away approximately 30 minutes later.

It was an appropriate end for a Catholic soldier who, according to many reports, was a practicing Catholic. His fellow soldiers told how he frequently attended mass “with devotion” before his operations.

Patricia Monsoor, his aunt and godmother, said he “went to confession frequently” and “other soldiers who were not practicing would sometimes follow [him to mass] because of his good example.”

When he was posthumously awarded the Medal of Honor, a tearful President Bush reminded the audience that the day Michael Monsoor died was the feast of Saint Michael the Archangel.

An emotional Donald Winter quoted a passage from scripture already remembered by so many to describe Michael Monsoor. “Greater love than this no man hath, that a man lay down his life for his friends.”

“When it came down to laying down his life for his friends, his faith allowed him to [do so] without a moment’s hesitation,” said Father Halladay.[7]

“I Have Given Everything”
The most moving tribute to Petty Officer Michael Monsoor was that given by Lt. Commander John Willink during an evening ceremony at the Navy Memorial honoring the fallen hero.[8]

He described in detail a photo of Michael released shortly after his death. The picture shows Michael walking at the head of his platoon, through the war-torn streets of Ramadi. They are shrouded in a greenish yellow mist used to mask their movements from the enemy. In spite of the chaos and danger which surrounds them, Michael is calm, almost smiling.

“As I look at this picture,” Lt. Willink said, “I hear a voice in a humble but confident tone.”

He then finishes his speech with the words he imagines Michael saying to him. They are words which I feel Michael Monsoor is saying to every American who appreciates the unbelievable sacrifice he made in a faraway land. Far from his family and the country he loved.

“I am Michael Monsoor…

“I am patrolling the streets of Ramadi… My eyes sting from the sweat, my gun and gear are heavy but these things do not bother me. There is no comfort here but this is the life I have chosen and there is no place I would rather be…and I am ready.

“I am Michael Monsoor… I miss my family. I want to hold my nieces and nephews again. I want to make them smile and laugh but I am far from home. Instead I smile at the Iraqi children when we pass them by. When we encounter Iraqi families I treat them with respect and dignity. I know the importance of family because there is nothing more important to me, than my family…

“I am Michael Monsoor, I love my country, my fellow SEALS and the men fighting along side us… I have lived life to its fullest. I have not looked back. I leave nothing but love and I have no regrets.

“I am Michael Monsoor… and I have given everything…For you!”